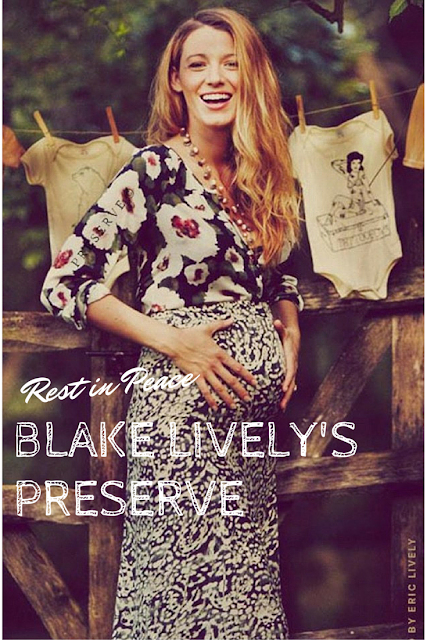 Anyone who’s been a fan of Gossip Girl, one of this generation’s most awesomely bad teen shows has fallen in love with Blake Lively.

Over the course of the show, I’ve had Blake hair envy, leg envy, outfit envy, then marrying Ryan Reynolds I had husband envy and last year she launched Preserve, and that gave me major lifestyle website envy.

The site came with some criticism and a lot of backlash, however I loved the idea. For the past year, Blake has been uncovering artisan brands that otherwise would not have been discovered so easily. Along with sharing some amazing recipes like the Rosette Apple Pie which I made last year and you can see below. She helped these artists get exposure and boost their small businesses like they never imagined, to me, she was giving back in a big way.

Unfortunately, Blake admitted in an interview today, the site “never caught up to its original mission: It’s not making a difference in people’s lives, whether superficially or in a meaningful way. And that’s the whole reason I started this company, not just to fluff myself, like, ‘I’m a celebrity! People will care what I have to say!”

The original mission Blake is referring to is “to touch millennials through storytelling, and the idea is to create a shoppable lifestyle.”

The good news is, Preserve isn’t the end. She’s already spinning her wheels to launch another site where she can truly say that her original mission statement matches the project.

Though I am sad to see Preserve shut it’s virtual doors on October 9th, I am thankful for the one gift that Blake has given me and that will keep on giving me for many autumn seasons to come: The Rosette Apple Pie. And because the recipe will most likely not be available on her site, I have taken the liberty to repost it here so it can live on long after Preserve dies.

RIP Preserve. Thank you for the memories.

Everything coming up roses…

A classic, from the ambrosial filling to the flaky crust, this delectable apple dessert is the perfect way to finish any meal. The romantic decorative finish adds a polished and photo-ready touch to an autumnal favorite. Each scrumptious forkful is like a piece of edible art, ready to enrich your fall table.

Melt the butter over medium heat. Whisk in sugar, lemon zest and cinnamon and cook for 2 minutes until smooth syrup is formed and all sugar is dissolved; then set aside.

Prep the pre-made crust and heat the oven to 400 degrees Fahrenheit. Use a Chinese Mandoline slicer and slice the apples into rounds. Slice as thinly as possible. If you do not have a Mandolin, a sharp knife will also suffice. Cut these slices in half. Use the half moon slices, starting from the outside line of the piecrust, and place them one after the other skin side up going in a clockwise direction. Layer the next row on top of the last. Continue till you reach the middle of the pie and finish off with the last few small pieces to cover up the center. The shape of apples should look like a rose once finished.

Pour the sugar and butter mixture over the top and bake for 25 minutes or till the piecrust is golden brown. Serve and indulge.